Ready For A Free Quote?

Is Scalp MicroPigmentation the right solution for you?
Fill out the form below for a free quote and consultation plan.

Note: We will use the information you’re submitting in this form to contact you back and answer your questions.

Questions about Scalp MicroPigmentation in the meantime?

Check out our FAQ page for answers on everything from financing to designing your new hairline.

Get your confidence back. See how Scalp MicroPigmentation can help you.

Meet John. John started losing his hair early…in his teens. By the time he was 21 he wanted to do something about it. Motivated, he started researching, pushing back the thoughts that his hair loss was completely out of his control. He didn’t want to feel helpless.

At 21, John had a budding career both in front and behind the camera as an actor, director, and writer. But he’d already lost half of the coverage of his hair and it was becoming more and more noticeable. He knew it was affecting how he felt about himself in and out of auditions.

His hair loss was something he felt consumed by, especially during auditions. Using makeup or coverups, John tried to hide his hair loss to make it less noticeable. It hurt knowing that the hair loss was out of his control.

John started researching medical procedures after he got tired of using makeup, coverups, and hats to cover his thinning hair. He found Scalp MicroPigmentation during his research.

The first SMP provider John found didn’t quite make the cut – they weren’t up to his standards – so he kept searching.

Then he researched close to 30 other providers, just to make sure BRAVI was the right choice. He kept coming back to BRAVI.

“BRAVI SMP changed my outlook in day-to-day life. My energy switched from…figuring out how to cover to figuring out “how to be free now.” Within the first two weeks..I started taking my full head of hair for granted…It felt amazing.”

John’s SMP procedure with BRAVI was “pleasant, conversational. The [technicians] were in total control and confident.”

John and his BRAVI technician designed his hairline together. His original goal was to look as natural as possible, matching what he had before he started losing his hair. “I didn’t know what I wanted specifically, so the techs and I came up exactly what I wanted.”

“I’ve never been happier…I’m happier with this hairline than I was with the original.”

Ready for a free BRAVI quote?

After John’s SMP procedure, his healing process “was a breeze. The next day, there was zero discomfort.”

With John’s new SMP look, his confidence has skyrocketed. People see him, not his baldness or thinning hair. His newfound confidence has led to greater success in his career and overall, he feels happier, more positive, and confident. The greatest win? When people say to John, “I didn’t know you had anything done!”

“I don’t have to cover up anymore. I can be free.”

“BRAVI allowed me to take back control. Control of my hairline, my look, and my confidence.”

The cost of John’s BRAVI SMP procedure? “BRAVI gave me options. I found the best one for me.” He found the best value for his investment. “Bar none. Non-negotiable.”

What would it mean to you? To change how others perceive you? Are you ready for your friends and family and colleagues to see YOU instead of your hair loss?

Listen To John Tell His Story In This Podcast: 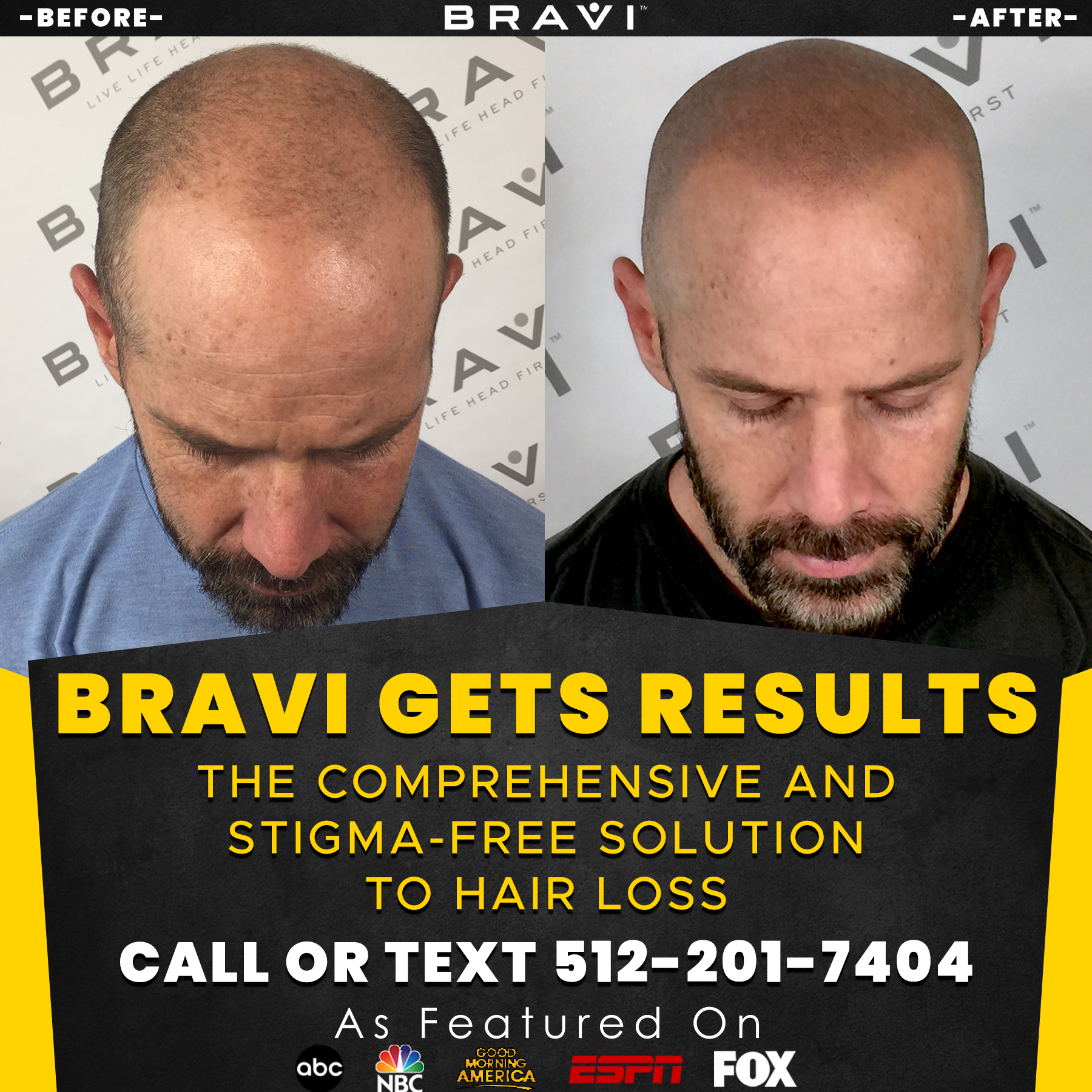