The hairline creates the facial frame—it is the showpiece!  A hairline that is misplaced or poorly executed destroys the illusion created by SMP.  It is critical that the hairline be implemented by an expert who understands the following:

* Hairline shape is different among ethnicities and genders

* Hairline implementations are the result of specialized tools, compounds, and techniques.

In our unparalleled gallery of TOTALLY UNEDITED BRAVI SMP Results, you will find these two categories.  What does “feathered” vs. “crispy” refer to?

These terms simply describe the line quality that creates the frame of the hairline.  This is a very polarizing topic!  Men very distinctly want one or the other…and they are equally adamant about not wanting the opposite.  At BRAVI, we take the time to listen to your vision and create an expertly-implemented hairline to meet your criteria.

“Crispy” refers to a clean cut, straight-edge line–one that is typically created with the help of an expert barber.  So, in the absence of a naturally-growing hairline to be maintained in this way, SMP can create the illusion of a full hairline that has been professionally cut.  At BRAVI, we have created hundreds, if not thousands of crispy hairlines, many of them on professional barbers themselves!  We understand what a crispy line is supposed to look like, where it should be positioned, and how to make the clean straight hairline blend back into existing natural hair density, undetectably.

“Feathered” refers to a soft edge that blends gently back into the hair.  Most times, naturally-growing hairlines feature increasingly sparse follicles and finer-textured hair as they transition from hair to forehead.  The “front row” is typically irregularly spaced, and when buzzed down, this perfectly-imperfect arrangement creates a soft, feathered borderline around the face.  Re-creating this illusion with replicated follicles using SMP requires true artistry and proper training, and we deliver!  BRAVI’s soft, natural, feathered hairline technique allows you to re-establish your frame totally undetectably.  People won’t notice your hairline–they’ll just notice how great you look!

“Feathered” or “Crispy”…BRAVI gets hairlines RIGHT!

Ready For A Free Quote?

Is Scalp MicroPigmentation the right solution for you?
Fill out the form below for a free quote and consultation plan. 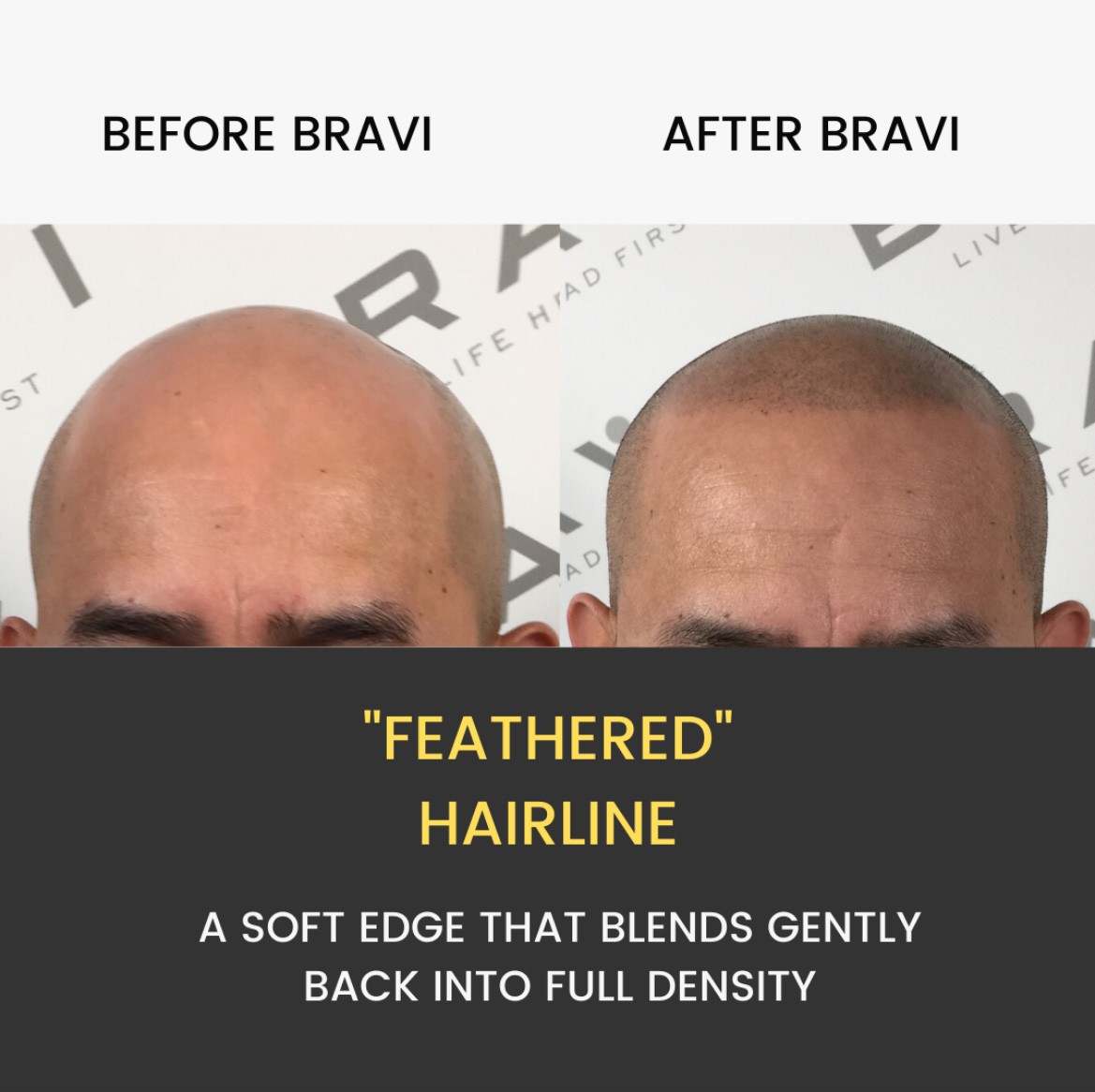 "I'm finally seeing my hair as the redness leaves. It looks amazing I already feel more confident. In denial really as everything else I've tried has broke my heart, I keep thinking it's all going to fade away next week or something. But regardless I know I'm in good hands now. Thanks!"

"I hardly even think about my hair anymore it's been a real life changer so thank you Text received by the BRAVI Service Line from a BRAVI SMP client who had suffered for years with Chronic Telogen Effluvium (CTE)."